We, Elephant In The Room, will appear at Stillwater Eagles 94 six more times this spring and summer!  Three pairs of dates are on the calendar:

If you have not dined at Stillwater Eagles 94, not only are their burgers and chicken excellent, but their Ellsworth Cheese Curds are a can’t-miss appetizer.  Please join us there!  No cover charge!

(The following review is kindly provided by John Augustine)

Some of you may be visiting this site because you’re looking for versatile, dependable bands looking for bookings around the Twin Cities. Then there are those of you who may be here because you know one or many of the guys in the band, and are curious about this band they’ve formed. In either case, the best way to give you an idea of what to expect from an Elephant In The Room (EITR) show is to write a review of one. Below is a review of their July 27, 2018 show at the Eagles 94 Club in Stillwater (the sixth EITR show I have attended, and my first one since they added vocalist Tommy Huynh).

I arrived just after the show started, while EITR was doing an enthusiastic rendition of Warren Zevon’s “Lawyers, Guns, and Money”. I had heard them do this before, and Warren Zevon’s songs fit vocalist/lead guitarist Mitch Berg’s range and personality very well. I went to the bar counter, ordered some good, reasonably-priced selections from the bar and grill, and sat back to enjoy the show. EITR ventured into previously-unexplored territory for their next song, “Found Out About You,” by the Gin Blossoms. New singer Tommy Huynh did a very nice job on the song. Adding him to the band makes it easier for them to have more post-1990 songs in their setlist. The other new dimension Huynh brings to the band is an ability to belt/scream out high notes in tune, which to me is a necessity for covering many hard rock songs. Because Tommy’s voice is in tune and powerful enough to be heard over hard-rock music, it frees Mitch to thrash harder on the guitar when he doesn’t have to carry the vocals. EITR had the audacity to do a rendition of Led Zeppelin’s “Rock and Roll” at one of their first shows. Adding Tommy to the mix makes it possible for their abilities to match their ambitions.

The rest of the band is very capable and entertaining. They have an extensive list of songs they perform, anywhere from the 1950s to the 1990s. If they are songs they have rehearsed, they will sound very good, to the point that if you closed your eyes on some songs, you might think you were at a concert with the original artists. They will also let select audience members they trust take over the singing for a few songs, and will do a surprisingly good performance of a randomly-requested song, even if they have not rehearsed it.

Perhaps the best thing that can be said about this kind of band is that the members seem to have a good, whole-is-better-than-the-sum-of-the-parts chemistry. Even the new singer, Tommy Huynh, used to work with Mitch Berg, and seems to fit well with the rest of the band. Jon Heyer plays backing guitar (rhythm or acoustic), or bass guitar on some songs. He also sings some of the slower, bluesier, pre-1980 songs. Drummer Paul Yackel can really pound the skins, and can sing lead on some songs as well. Torleif Sorenson often stays in the background during performances, but has the ability to provide whatever texture is needed (bass/keyboards/backing vocals) for a song. He’s most noticeable on songs that feature a strong bass line. He uses a six-string bass, which is not something you see in your average bar band. At the first few EITR gigs, he didn’t play any keyboards, but since he has taken up that role the range of songs they can fully perform has increased.

EITR band leader Mitch Berg is a very capable singer, writer, and musician. You can hear that on his solo Supreme Soviet of Love CD of original music, See Red, on which he did all the writing and most of the instruments and singing. He can play blues, punk, rockabilly, and even some reggae, country, or classical. He mostly plays straight-on rock music.

Now, back to EITR’s July 27 show. Besides the Gin Blossoms song and the Led Zeppelin song, other songs EITR did particularly well that night, according to this reviewer, were Golden Earring’s “Radar Love”, “Closer to Free” by the BoDeans, and “Bye Bye Love” by The Cars. New singer Tommy Huynh was at his peak on the song “Gone Away,” by The Offspring, although it may have been lost on the older crowd that tends to make up most of the audience at a fraternal organization lounge like Eagles 94. EITR played to that audience with several Eagles songs, and were in their comfort zone while doing several Tom Petty songs. If you stayed for the whole show, you were treated to songs by Sister Hazel, Wilson Pickett, Ian Hunter, Bob Seger, Bob Marley, Tommy Tutone, Cheap Trick, Aerosmith, Stray Cats, Lynyrd Skynyrd, the Georgia Satellites, the Steve Miller Band, and the Greg Kihn Band.

While EITR is talented and versatile, they’re not going to be all things to everybody. They are not a band you would hire just for their looks, with music as an afterthought. If you’re looking for the Good Ole Boys band that was supposed to play at Bob’s Country Bunker in the original Blues Brothers movie, they are not your band. They are also not going to be your band if your favorite instrumentation is beat-boxing or scratching on a set of turntables. They don’t do barbershop or Crosby-Stills-Nash level vocal harmonies. They don’t do death metal, and they won’t treat the audience to expletive-filled banter between songs. But even though they don’t do this for a living, they come off as skilled pros, not a goof-off novelty. Elephant In The Room is just a good, fun, five-man band, and if you haven’t experienced an EITR show, you should. 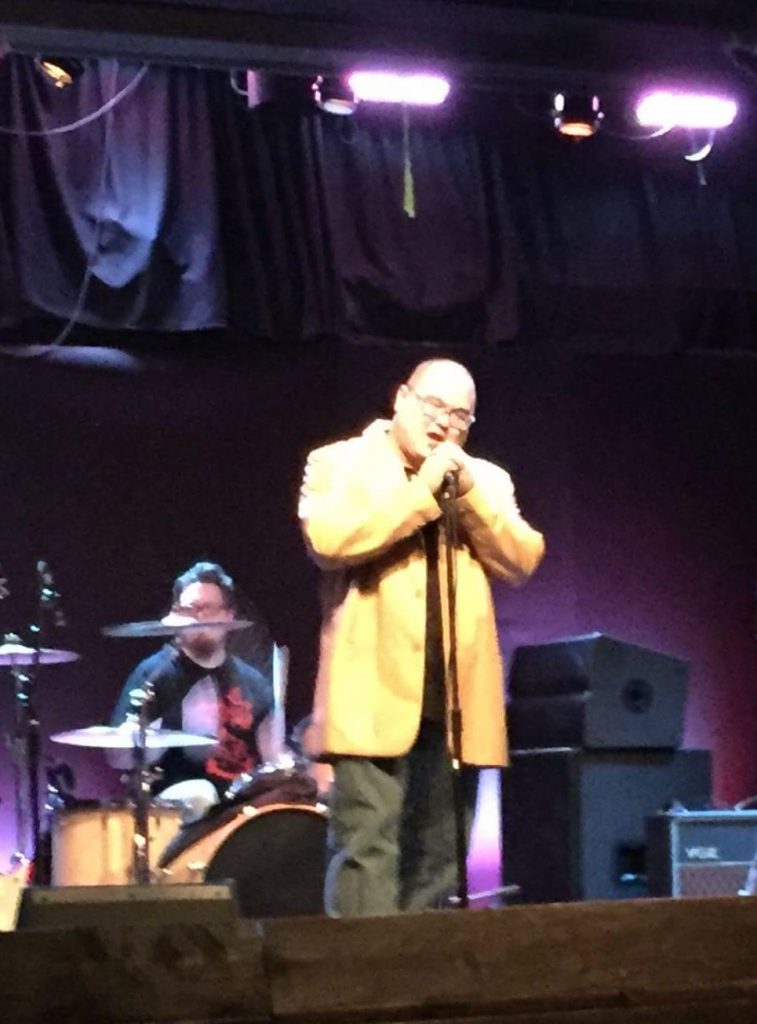 Tommy Huynh joined Elephant In The Room as the new lead vocalist on June 24, 2018.  Already a successful radio producer and engineer, Tommy was previously the lead vocalist of the band Garage Orphans.

With Tommy at the mic, Elephant In The Room’s playlist automatically grows, giving us the ability to perform a whole host of additional music, in a higher gear.

We, Elephant In The Room, will make our East Metro debut on Friday evening, July 27 at the completely-remodeled Stillwater Eagles 94. We will begin at about 8:00 p.m. – and if you get there by 8, you can also try one of their burgers, broasted chicken, and their Ellsworth Cheese Curds. 🙂

Set aside Friday evening, July 27! Getting there is simple, too. Take Minnesota Highway 36, go east of Interstate 694, to the Oasis Avenue North stoplight. Eagles 94 is behind the northeast corner on 60th Avenue North.

Join Elephant In The Room on the evening of Thursday, July 26 at 7:00 p.m.  We will be playing a special fundraising party at Willy McCoy’s in Champlin.  We will be joined by Rick Aguilar and members of his new band, Space Force.  Also joining us on stage will be Drew Lee of Justice and Drew, from Twin Cities News Talk – KTLK-AM 1130, and musician Frank Long.